We Need To Talk About Influencer Marketing

Home / Digital / We Need To Talk About Influencer Marketing 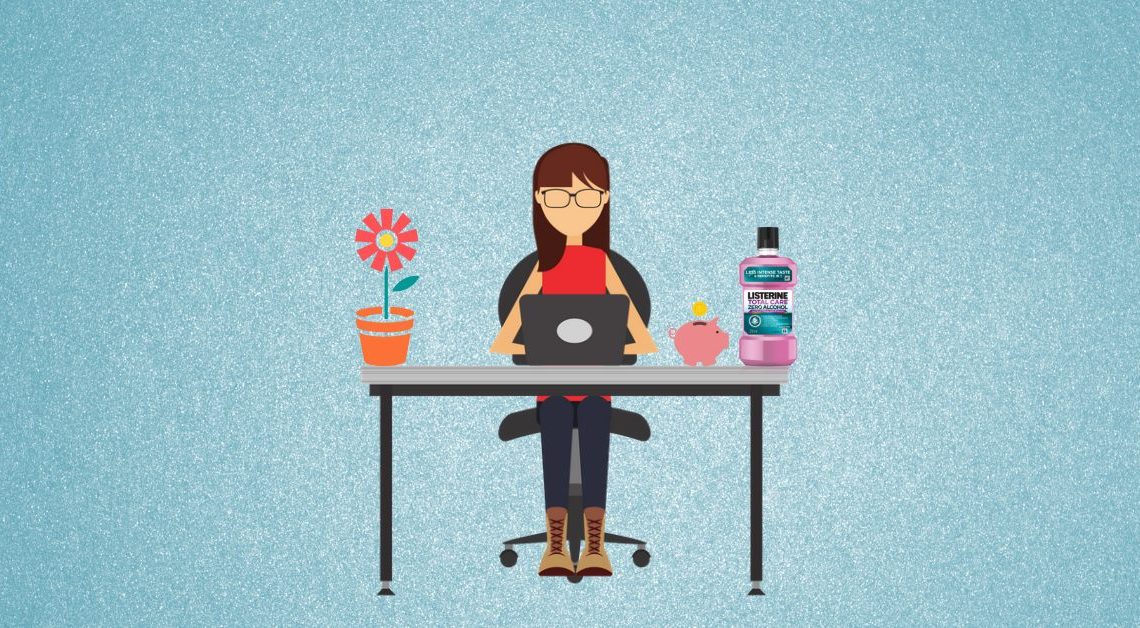 There’s a lot of frustration being vented towards influencers and influencer marketing at the moment.

Let’s start with the post that kicked off a furore a couple of weeks ago: the Listerine Instagram ad posted by Scarlett Dixon.

I’m going to use this example to highlight what some of the issues with the sector are, and hopefully explain why wider society reacted in such an extreme way. 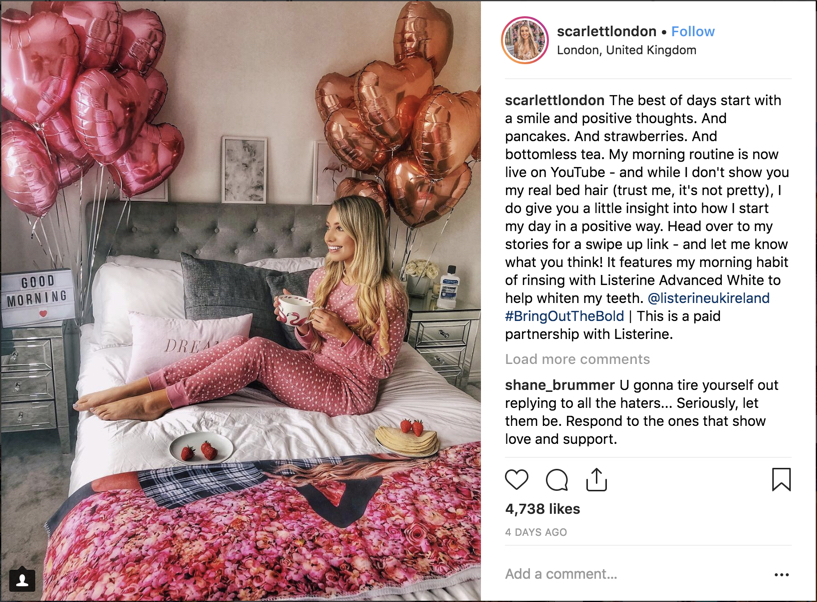 As a sector, we need to do a whole lot better with terminology. Using it, understanding it, and getting others to use it and understand it.

The Listerine example above is influencer advertising. Johnson & Johnson paying Scarlett to access her audience and incorporate a product placement into one of the posts. More often than not, a payment changes hands. If you look back through Scarlett’s Instagram feed, this is the only post you’ll find about Listerine.

For influencers, it is a balance of generating revenue in an authentic way, but also managing the expectations of an audience who are looking to connect with real-life stories and content. 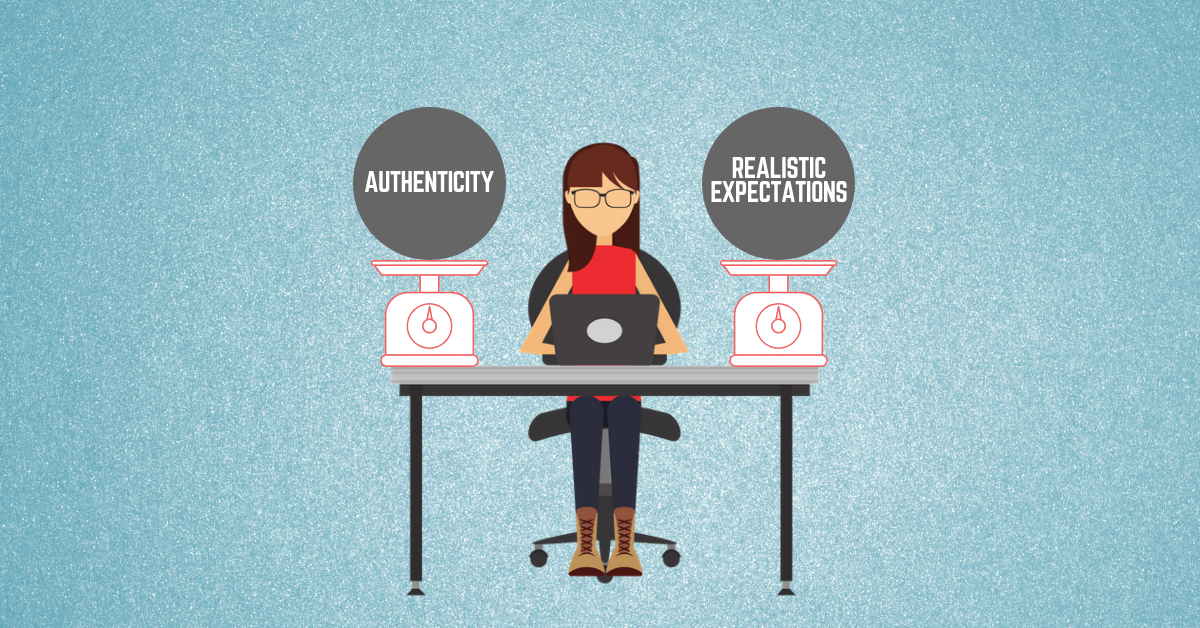 Now some of you marketing purists will say that advertising is a form of marketing, so influencer advertising should fall under the influencer marketing umbrella, and in a sense, you are correct, but that leads me onto my next point about brand advertising versus human advertising.

But he also said the following: “What is authenticity when it come to advertising? The whole idea about advertising is to make believe. The point is the advertising is never about what is, but what would be possible.“. He has a point. Take the latest joint Waitrose and John Lewis advert for example – that would never happen at a regular school play. So why is there such a uproar when influencers stage content for an advert?

In Scarlett’s case she freely admitted that many of her posts are staged. In fact she goes as far to say that her feed ‘isn’t a place of reality‘.

And thus, we hit the crux of the problem in influencer marketing & advertising: because influencers are humans (as in real people), there is a level of trust and authenticity that should emanate from their content and social media feeds. When this doesn’t happen, we as the audience, as fellow humans, feel cheated. It’s ok for brands and organisations to stage adverts, because that’s what we know. That’s the norm. It’s what we’ve seen on billboards, on TV and online for years. But when an influencer does the same thing and stages something that is unrealistic and not aligned with our expectations, our trust is lost and our brains melt.

Authenticity is important in all forms of marketing, especially in today’s world which is filled with fake news. But above all, authenticity is required (expected) by influencers, because they aren’t viewed by their audience as brands. They are seen as people. People the audience can connect with.

I am a travel blogger in my spare time. It gives me a great position of being able to see both sides of the fence: that of a marketing perspective, and the perspective of an influencer.

What I learnt very quickly is that the audience buys in to who you are online. So do friends. They expect you to be the same person online as you are offline. With me, I try and do that to the best of my ability, but for others, they are completely different people online than they are offline (I’ll come back to this point in a second).

As such, if I ever promoted something that ‘didn’t fit’ in the eyes of the audience and my friends, they would call me a sell out and make it known that I’d stepped out of line.

I don’t rely on income from travel blogging to sustain a living. Influencers who create content and rely on brand collaborations for their income on the other hand may go chasing the pound notes to pay the bills even if the collaboration doesn’t quite fit with their images or regular content topics. By doing this, they can often ‘sell out’, which can alienate and annoy their followers.

Social media has allowed people to get closer to their idols and heroes. By sending a tweet directly to them, you know they’ll have seen it. It’s that easy. A far cry from the days of fan mail and lingering outside hotels to see if you could catch a glimpse of the stars. But it’s also made people cocky. Arrogant. Many people hide behind their social media masks, turn into trolls and hurl abuse at anyone who’s posts or opinions conflict with their life in some way. There’s no excuse for online abuse, and whilst the social networks are doing what they can to cut it out, a lot more needs to be done.

What then happened was everyone who saw the post – and weren’t used to Scarlett’s pink and pretty feed – immediately slammed her for being false and contributing to the Instagram ‘lie factory’. Now, let’s get one thing straight immediately. Scarlett received death threats. That is NOT ok.

There was a lot of frustration directed at Scarlett and the post. But let’s be honest, this was more like the straw that broke the camels back.

Here’s where I think the frustration towards influencer marketing comes from:

All the points above have led the industry to this point. There is scrutiny on influencer marketing from all angles, and rightly so in many cases. But how do we fix that?

It’s not just influencers that need to regain trust, it’s the whole influencer marketing sector. Here are my thoughts on the potential solutions to the problems:

1) The Social Platforms Need To Step Up And Stop The Bots – how Instagram (Facebook) has got away with allowing bots and fake accounts for so long is unfathomable. But the problem is now so massive and widespread that the only people that can solve it are the platforms themselves. They need to cull the bots, have much better control over APIs and who uses the APIs and for what purposes, and then – most importantly – cull the accounts that have created the plagued system.

2) Require More Than Simply An Email Address To Set Up An Account – it takes two minutes to set up an email address. Then all the social networks need is verification through that email address for the new account. This is partly the root of the problem. If we made it more difficult for people to create accounts, we wouldn’t have so many fake accounts in the first place. Two factor authentication for all is a start, and especially if only one mobile number can be assigned to one or two account, AND that mobile number can be verified against an actual person.

3) The ASA Needs To Make An Example Of Someone – non-disclosure still happens. A lot. A few people have had their knuckles wrapped by the ASA, but no-one has been fined as yet. According to the ASA website, there have been 8 rulings against influencer marketing and their social media content over the past 12 months (CAP codes 2.1, 2.3 and 2.4), but none have resulted in fines. Now, I appreciate it is difficult because both the influencer and the brand would be held accountable, but until someone is fined, and it hits the news, more people will simply get a slap on the wrist and the problem will continue. Take the example of Louise Thompson and Vanity Planet. Louise claimed she didn’t know she had to include the word “#ad” to her Insta Story (and thus, see my final bullet point below about disclosure).

4) A New Regulation Framework – influencers, advertising agencies, PR companies and brands all need to contribute to an influencer marketing framework that aims to regulate some of the activity that happens in the industry. This could be a specific process for setting up an ad campaign. It could dictate topic similarity, and potentially align brands and products with influencers that already post content about those same topics. It could inform a pricing model or ad inventory system, a bit like Tribe have done. None of these things could be possible. All of them could be possible, but we need to make a start regulating influencer marketing somehow.

5) Better Social Platform Disclosure Labelling – the social networks have taken steps in the right direction, but they need to do more. For example, there could be some sort of check box before people post an image, story, video or tweet clearly labelling whether the content is an ad or sponsored. A simple pop up explaining disclosure and ASA rules would help bring awareness to everyone that disclosure is require.

Below are just some mock up examples of how the labelling could look on Instagram: 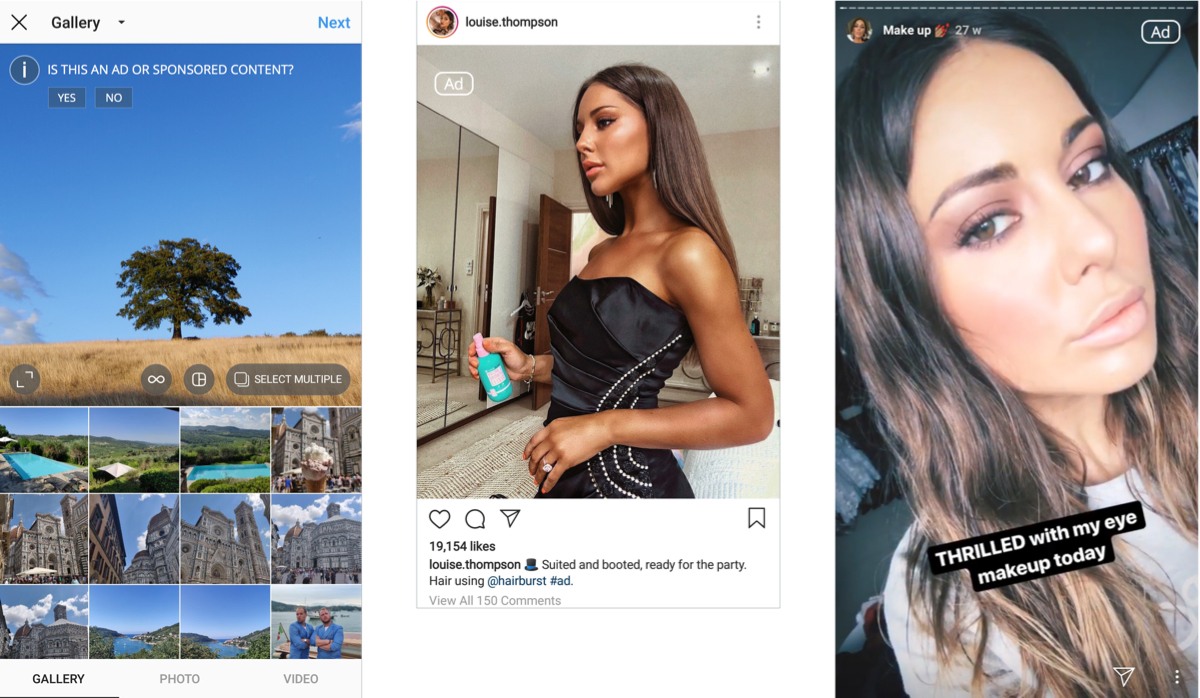 Lastly I go back to the point about authenticity, integrity and selling out. It is down to the influencer and only the influencer to decide whether to work on an advert or campaign that they believe will strike a chord with their audience. That freedom of choice cannot be regulated, and nor should it be, but a lot of responsibility rests with influencer and bloggers in order to portray the influencer marketing industry in a positive light.

Here’s hoping the sector finds solutions to the problems soon.